How did you get started in the music business, writing plays and music at the same time?

After college at Washington State University, I took off to New York, forsaking law school, to make my mark and throw my hat into the ring with the best and the brightest who were all there in 80’s NYC. We all lived in fifth floor walkups and held rooftop parties because we couldn’t afford the bar scene, and really didn’t want to be a part of it, at least the friends around me who were actors, painters, sculptors, playwrights, dancers, singers, writers, etc. Many of us worked for catering companies, or in advertising, and we all were bright, talented, and ambitious. Some of us ‘made it’, some didn’t. Two years after I moved to Manhattan, I wrote a play with music called 18K’s that led to me signing with the William Morris Company, then the largest entertainment management company in the world. At the same time, I signed with a music management company—All-Out Entertainment—out of L.A. Eventually, my agent got fired by the William Morris Company leaving me high and dry as a playwright, and All-Out folded before I could record an album. So goes the life of an artist. I moved to Boston where I won a finalist award in the Clauder Competition for New England plays, and at the same time I formed Garr Lange & The Big Rig, a groundbreaking assemblage of some of Boston’s finest rock musicians. We were considered country, but in truth, the kind of country Nashville was putting out was nowhere near what we were doing. We defied genres, and that was part of the problem with the labels. Where to pigeonhole us. I took rock, country, blues and mashed them all together to create our ‘sound’. It was fresh and original…. perhaps too original.

How did you form The Big Rig?

It was a real fluke of nature. Mark Sutton, who was one of Boston’s finest guitar players and bandleaders, literally heard me playing and singing through the floorboards, since I had moved to an apartment just below him in Brookline Village. One day– he was more of an acquaintance than anything– he stopped and knocked on my door and asked me to play a few songs for him. I did, and his reaction was…”Somebody needs to get you in the studio and that somebody is me.” He gathered together some of his former bandmates and we went in and recorded an 8-track collection of four songs at Heart Punch Studio, right up the street from where we lived. It was owned by Greg McCleary who was also a very fine keyboard player, so all together, with the addition of two very fine female vocalists, we formed Garr Lange & The Big Rig

Anything I might label as stupid moves in my career?

Stupid moves? You mean like turning down major label record deals because they wouldn’t take the band, or they wouldn’t let me record my own songs, sure, but moves that just fell apart through no fault of my own?… I’ve had those too. As I mentioned before, I’ve had agents get fired, music entertainment companies that folded while I was in the middle of a project, a record deal with a high-powered NYC music industry lawyer who got into a squabble with my manager, and thereby folded the company while we were right in the middle of recording an album. I literally got told that they had folded as I was singing a final vocal in the recording studio. So, we packed up our gear and left. End of story.

This would lead into a discussion about the business aspect of the music business.

I’ve got some really funny stories about things that I did wrong that cost me a lotta money (and from having a potentially big career in the entertainment business). I was the can’t miss who missed. But there were reasons why, I think, upon looking back. I wish I could blame it on sex, drugs, and rock-n-roll but I don’t even drink, let alone drug. Now for the sex part…

What do you do best in your mind… write music, sing, write plays, write novels… which would you pick as your ‘best’ talent?

Probably write plays. My use of stage and character has always been unique. But it would be hard to gauge. Each talent demands a different kind of skill, skills that I have worked on and developed over the years. I’ve had more success as a singer/songwriter, but that is not to say that my success as a playwright or a novelist are any less. I had people in both New York and Boston who thought I was wasting my time as a musician and that I should dedicate all my time to writing plays. I couldn’t do that because I felt I had something to offer as a musician-singer-songwriter as well. I’ve haven’t had the same opportunity to have my plays produced (I have written six, with only two having had full-blown productions) and I’ve  had one novel published, Bay Hymns, that was published last year. It was published by Xlibris Press and is available through Xlibris and all the major distributors… Amazon, Barnes and Noble, etc. I have another novel, The Columbus Day Blow, that is waiting in the wings. I wrote it in 3 months, when Covid had just hit, and I needed something to do with my time. I’m proud of my abilities to write, whether it be lyrics, plays, novels. I’ve always wanted to be a writer. I just didn’t know where the skill would take me.

Do you plan to release anymore music?

I’m recording an album with a Boston producer right now, Pretty Postcards with Greg McCleary, which is an exciting eclectic mix of styles that I’m notorious for… genre bending. I combine rock, country, blues into a mish-mash of a style that I call my own. It has also been one thing that has held me back with the major labels… is he rock, is he country? At some point I’d like to release the remasters of 12 Rig tunes that I think are still relevant today. We started out as a country influenced band, then morphed into a rock band towards the last couple years of our existence, which was 4 years altogether, 1986-1990. We became headliners on the Boston rock stages, and I was written up by the Boston Globe and the Boston Herald, as well as the Phoenix and smaller publications. We had a good run. We were Alt-Country before the ‘Alt’ had been invented. 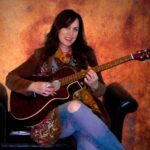 On The Other Side song by Garr Lange

Everything But Peace by John Tamilio III of 3D